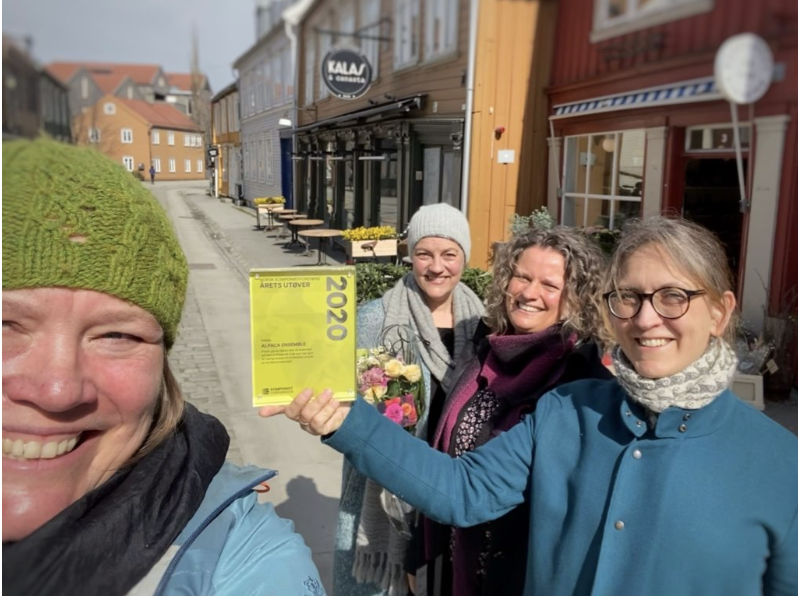 The Norwegian Society of Composers has awarded the "Performer of the Year" award since 1985. The prize goes to a performer or ensemble, at a high professional level, who has made a special contribution to Norwegian contemporary music over the past year or over a long period of time.

Traditionally, the award is presented in December, but as a result of the pandemic, the event had to be cancelled in 2020. The award was presented in Spillerom Sunday in NRK P2 on 16 May, where the ensemble was interviewed in connection with their concert duringOnly Connect 2021 in Trondheim.

The laureate receives a donation totalling NOK 100,000 for new concerts or activities that promote Norwegian living composers. It is open to anyone to propose candidates for the award, which is ultimately nominated by the association's music committee.

Reasons given by the Music Committee:

"This year's performer has stimulated Norwegian contemporary music and Norwegian composers for decades. The ensemble maintains a high professional level and has created a multitude of productions that document a wide range of expressions.

At the same time, they have a particularly well-developed musical profile. They experiment, they are playful, searching and, not least, fearless. They also program a high percentage of female composers. The ensemble's lineup is flexible based on a piano trio established in 1996. It is high time that the performer of the year award goes to the Alpaca Ensemble.

Alpaca Ensemble is a flexible ensemble of different sizes and compositions, with a core consisting of Else Bø (piano), Sigrid Elisabeth Stang (violin) and Marianne Baudouin Lie (cello. During the award ceremony in Spillerom Sunday, the chair of the music committee, Morten Christophersen, elaborates on the jury's reasoning and says, among other things:

Alpaca Ensemble has been proposed a number of times, so it's high time they got the award.

NRK's Anikken Sunde interviews the prize winners in Trondheim where they tell how it all started, and about the ensemble's projects and plans for next year. Listen here!