Institution of the flesh – Bergen 27 August

Institution of the flesh – Bergen 27 August 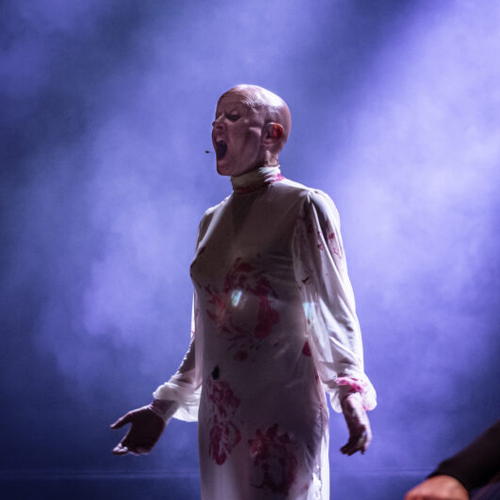 "Institution of the Flesh" was developed in collaboration between us, Alwynne Pritchard and Neither Nor and was performed at Conerteatret in Bergen on 27 August.

Alwynne Pritchard on the project: "Imagine that in every song we sing, the first human utterance can be heard. Feel the sensation of muscles contracting, a gasp of air being expelled and imagine the first ever cry of pain, pleasure, wonder or protestation coming into being. Then slowly, slowly, slowly it evolves into song. And the kinetic forces that make these songs, this music happen, are as old as those that brought forth flowers from the oceans. The thing that connects a mournful melody and the drawing of horsehair across the gut string of a 'cello, is also in how we experience the soft descent of rainfall, the violent tumble of a rock and the fragile beating of a bird's wing. It's what fires our depictions of angels, fuels our fear of god and even drives our abuse of people and of power. Everything is motion, everything is connected and everything is collated and organised in the body. The first breath is everything."

The lyrics used in the performance are by Alwynne Pritchard, William Blake and Heine Müller.

Alwynne Pritchard is a British composer, vocalist, writer and performer based in Bergen. She has created works for orchestras, ensembles, musicians and other artists internationally, and performed in Norway, France, Italy, Germany and the UK. In 2015 she performed the musical theatre Kompani Neither Nor with her partner Thorolf Thuestad and in 2020 she wrote and produced her first animated film in collaboration with the Italian artist Domiza Tosatto.

Alpaca Ensemble also collaborated with Alwynne Pritchard in 2019 with the project "Black is the Colour" and is delighted to continue working with her as an artist.