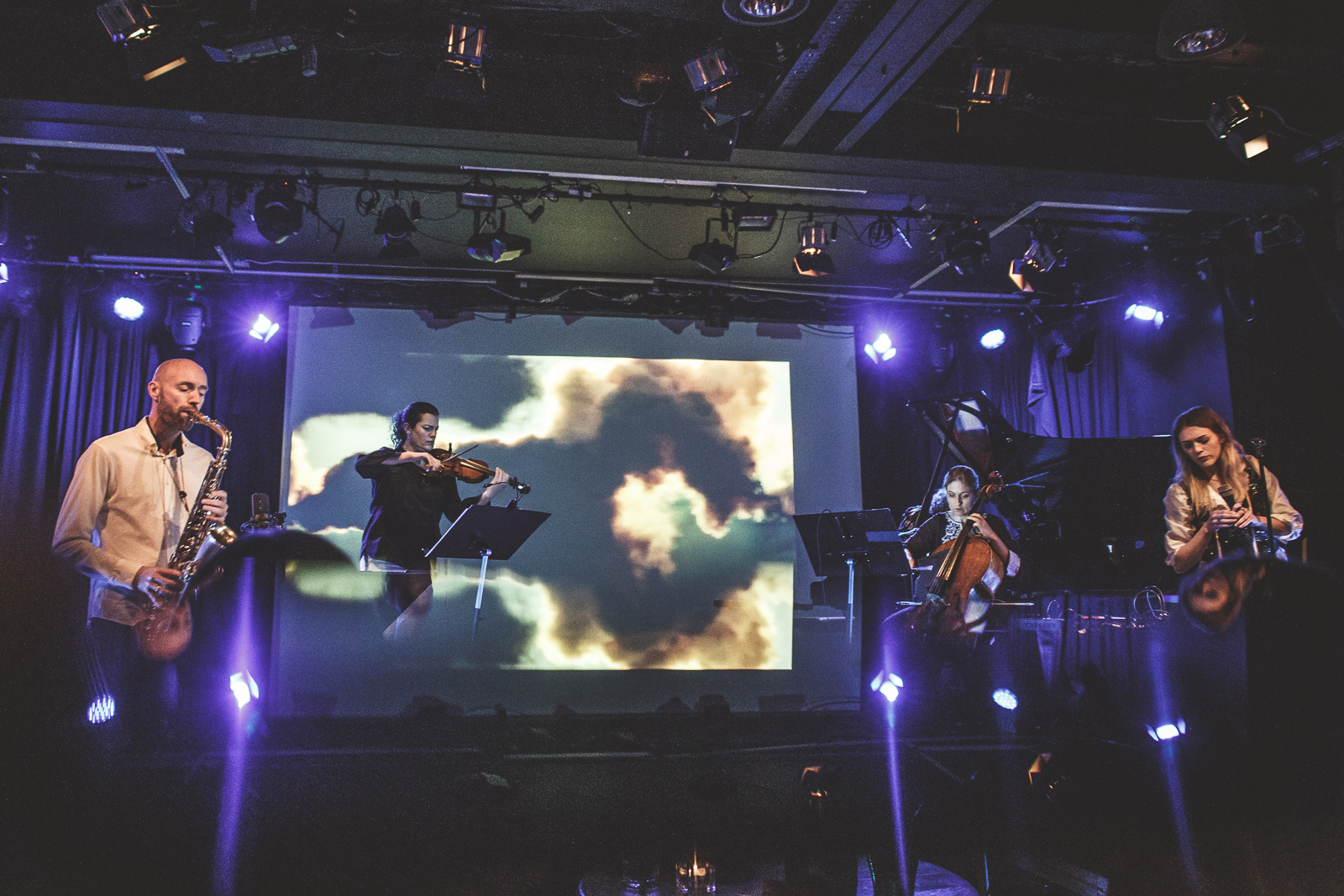 Alpaca Ensemble marks its 20-year collaboration with jazz saxophonist/composer Eirik Hegdal with a heavenly journey of a record project!The new project "The Sky Opens Twice" shows a whole new side of the ensemble where they draw pop music into the intersection of jazz and contemporary music. The result is a very distinctive Contemporary Press!

The release was celebrated with a record release tour in collaboration with Midtnorsk Jazzsenter October 2021. Concerts in Storstuggu in Røros, Dokkhuset Scene in Trondheim, Storyville Jazzclub in Molde and Jazzklubben Volda Ørsta.

Eirik Hegdal and Alpaca Ensemble have several collaborative projects behind them, including "Tapet Tapet!" which got several dice rolls 6 rolled after them, and "Mekatonia" from 2012 (album from 2017) – a magnificent co-production with Cirka Teater during Trondheim Chamber Music Festival.
"The Sky Open Twice" is the ensemble's eleventh album and is a commissioned work by Eirik Hegdal. Hegdal has invited the young and creative vocalist Thea Ellingsen Grant to join the project. (Among other things, known from the band JUNO.) With her semi-English origin, she has written colorful and funny lyrics to the music. The album is a playful creation of pre-produced pop beats/backing tracks, free improvisation, contemporary music and jazz.

"Alpaca Ensemble has made itself known as one of the country's most prominent contemporary musicians, but at The Sky Opens Twice they have come up with pop music. They see what it has to offer, and take it seriously. The electronics and the studio itself get to come out juxtaposed with the acoustic, and the result is very unlikely.

Souldan dreg an album in so many directions at the same time without falling together.

Here, the Alpaca Ensemble has made it unoglege. It is a musical expression that is both a finished work, a co-ophending album, and a collection of self-evident good bilete Dei has created noko that works extremely well as a spectacle."Anders Kruse | Under the Tassel

Eirik Hegdal is a freelance saxophonist and composer, associate professor at NTNU/Jazz line in Trondheim (50% position).He runs his own ensembles such as Team Hegdal, Eirik Hegdal "Musical Balloon", the folk band "Følk". He was artistic director of Trondheim Jazz Orchestra in the period 2002-2017 where he wrote and arranged music for many different versions of this ensemble. Among the many amazing musicians in these projects we find Joshua Redman, Maria Kannegaard, Pat Metheny and Dave Holland.Hegdal is part of the ensembles Angles 9, Skarbø Skulekorps, en en en, Alpaca Ensemble, Gard Nilssen's "Supersonic Orchestra", Trondheim Jazz Orchestra.He has won a Spellemann for "best jazz album" with Team Hegdal, has written music for Trondheim Sinfonietta, Oslo Philharmonic Orchestra, Bodø Sinfonietta, Alpaca Ensemble, Trondheim Jazz Orchestra, written tingingsverket for Vossa Jazz (2018), was awarded Kongsberg Jazz Festival's own musician award, which resulted in three unique concerts at the festival in 2019

Thea Ellingsen Grant currently works as a vocalist, composer, songwriter and producer in several different projects and bands.She has brought rock, pop and classical music from her childhood and gradually been introduced to the world of jazz and improvised music. In 2019 she completed her bachelor's degree at the Jazz line in Trondheim and has since then been active on the Norwegian concert scene with, among others, the bands JUNO and Caramel 11, the contemporary dance project How To Read Water and Thea Ellingsen Grant – solo.Thea has several releases behind her and in 2020 released her debut album Young Star with the band JUNO.