Alpaca Ensemble derives from the piano trio Alpaca Trio, a versatile chamber group frequently collabo- rating with other musicians, artists and composers. They initiate innovative projects crossing and ques- tioning boundaries between established genres, and have had numerous works written for them.

Sigrid Elisabeth Stang, violin, studied with Bjarne Fiskum and Levon Chilingirian at the Music Concervatory in Trondheim (now NTNU), Norway, and later with Dona Lee Croft at the Royal College of Music, London, where she was awarded Distinction on her solo-/ensemble recitalist diploma. She has participated on masterclasses with Lorand Fenyves, Eugene Sarbu, Hugh Bean, Sergei Fatkouline and Leo Philips. She has appeared as soloist with the Trondheim Symphony Orchestra, as well as several chamber orchestras, such as the Trondheim Soloists and Midt-norsk Solistensemble. She won the “Best Performance” and the “Best Bach Performance” at the Ealing Music Festival i 1998, and “The Leonard Friedman Violin Award” at the Mendelssohn on Mull festival in 2000. Between 1999-2001 she worked as student assistant at the Welsh College of Music and Drama in Cardiff.

Since 2001, Sigrid has been based in Trondheim, Norway, working with Orquestra do Norte (Portugal), the Trøndelag Theatre, Ensemble NOOR, Camerata Nordica, Norwegian Baroque Orchestra, as well as most of the Norwegian symphony orchestras. She also is co-founder and -organiser, as well as a player, of Eisler Ensemble and Alpaca Ensemble, doing concerts, tours, artist collaborations, commissions and CD productions. 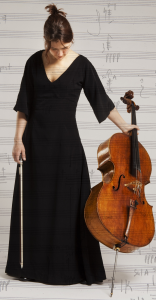